I checked and rechecked our med box, after ensuring we had taken our acetazolamide tablets from the previous day to counteract acute mountain sickness. Sanju and I had consumed one of the capsules each starting a day before the big trip, according to established research, to prevent possible catastrophies. The journey to Bangalore from Salem went pretty well, thanks to a taxi arranged via a friend (Prabu Sankar). The only issue was a huge journey from within town, to the Bangalore International Airport (2 hours in itself!) Once there, Sanju and I appreciated the awesome airport which had its own tale of neatness and beauty to tell, complete with gardens and great interiors. We settled ourselves with some iced coffee and later, lunch from Coffee Day. 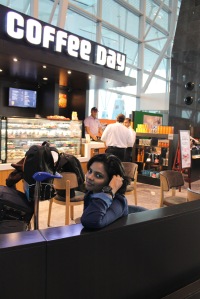 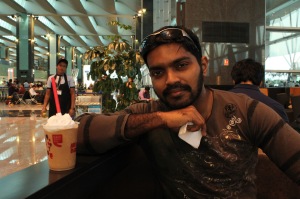 After a four hour wait, we shifted toward security checking and our departure gate. The plane was waiting, engines humming as we boarded the craft, which took us to Indira Gandhi International Airport, Delhi. I yawned and groaned inwardly thinking of the six hour wait there before our next flight to Leh. We shifted from the arrival section toward the departure terminal in Delhi, where I was shocked to see there wasn’t even any space to sit (only around twenty chairs all of which were full) before the security checks (which was to be done only four hours later). We resorted to sitting on one of the decorative stone slabs, dangled our feet and fiddled with our mobiles, taking turns to sleep while watching over the luggage. Finally the time came to drop in our cabin luggage, following which we crossed security and headed for the larger waiting area. I felt the capsule slide its way down my throat, my mind racing over various aspects of the mega trip. We were shocked to see the airport was in renovation, and we could hardly get any sleep over the whining noise of carpentry. Food court was closed (I don’t know what could have been worse) and we had to rely on two small shops for our beverages and snacks.

Six thirty AM arrived (the flight was delayed by an hour) and we were finally en route to Leh. As we neared our destination, boring landscape paved way to beautiful snow capped mountains, serving as a great sight for amateur photographers such as myself. 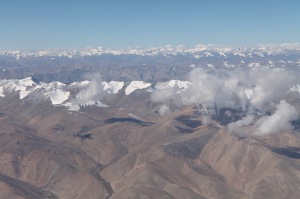 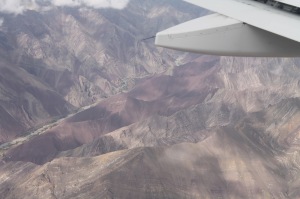 As our plane taxied to a stop, we were announced that the temperature was a pleasant 16 degrees C, but it definitely felt colder as cold winds howled around us, and I was thankful for our beanies (aka monkey – caps) and warm jackets/clothing we had taken precautions to wear. The airport was simple, but slightly bigger than I had imagined, though seeing only one belt for receiving luggage made me smile. We found our bags easily enough, and the first thing we did following that was to place a call home. Our mobiles were unfortunately not working, and we called from the airport’s telephone, which the kind lady – in – charge, gave us free of charge. This photo shows (more – or – less) where Leh is situated: 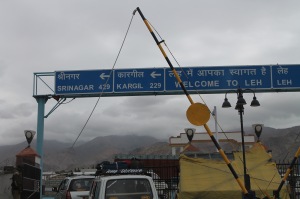 From here, we managed to find a super – friendly – taxi – driver ‘Sonam’, who took us to our hotel (Omasila) for the standard Rs. 250 – charge. He was quite fluent with English and informed us that only networks “cell one” “airtel” and “aircel” with prepaid connections worked there. He dropped us off at our Hotel (of which I was expecting the worst after seeing a rather dilapidated entrance) 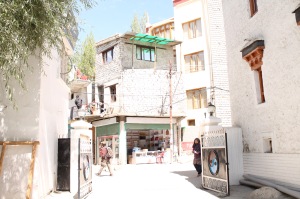 (view of entrance from inside the hotel grounds)

The sight that greeted us was simple, but awesome however once we entered the threshold! 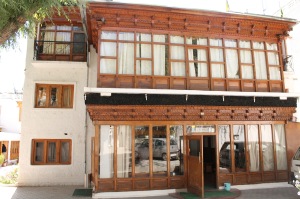 Mr. Sonam (our driver) departed after excitedly informing that he would take us for local sightseeing even saying that he would offer his own extra sim card for our personal use during our stay starting tomorrow. We settled down for coffee while our room was readied, and I was impressed with the garden, and the hospitable staff, which gave a feel of family, unlike other commercial places.

Our room was splendid, and we made ourselves at home. The view overlooking the garden and in – general was awesome, and we couldn’t have been happier. 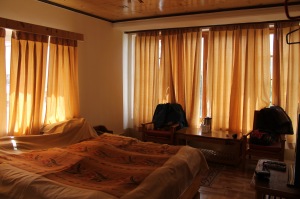 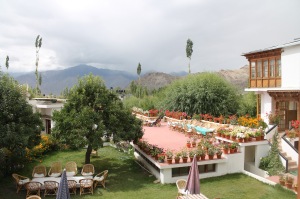 We settled for an early lunch at the restaurant, and experienced some of the best greens I have ever tasted in my entire life, including some other good stuff. 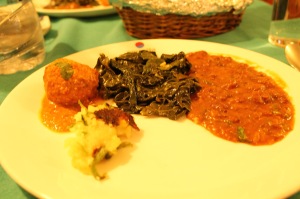 We followed the advice we had read online, and resorted to less food, lots of water and lots of rest. A three hour afternoon siesta did a whole lot of good! Tea was awesome, which we had on the portico which we could see from our room. 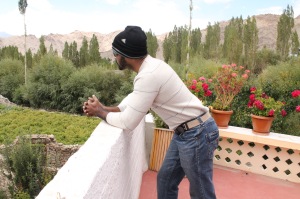 Tea session was followed by more rest in our room (so far, we had absolutely no trouble with accomodating to low oxygen levels except while climbing the staircase) Dinner time came, when we donned our warm clothing and made a dash for the restaurant which was separated from the hotel reception by five yards. We faithfully took our ‘Diamox’ tablets (aka acetazolamide) after dinner and headed to bed.

I smiled as I watched our favourite series on Star World – “Blacklist”. OH and by the way – Reaching Leh? – MISSION ACCOMPLISHED!