All of us are bitten by bugs. Some of us by the food – bug, others by work, but for me I was bitten by something else altogether. Running, cycling and swimming keep my mind fresh and completes my sedentary day.

The Dhanushkodi 600 km BRM (BREVET DE RANDONNEURS MONDIAUX) was another try at pushing my body to the limit. Approved by the Audax cycling club from France, the route took us through 600 km of sunshine, wind, rain and thunderstorm. Quite the story.

Track & Trail, Ramsun was open at 3 pm, when Anand and myself reached the venue. We got our BRM cards, ticked off the final checklist and met co – riders from different Indian states,accounting to a total of 70+. I took some time to delete unnecessary apps from my phone to save battery and space. Joy took care of my drop bag which I was to use at the 350th km mark. I secured my helmet and strapped it in, switching on my Xiaomi smartwatch to track my progress.

Anand announced the route and in another five minutes, we were off.

Anand and I took the lead helping participants find their way out of Trichy, into the highway. Once we were there, they sprinted off. I kept a steady speed of 20 to 25 kmph to make things easy for Anand, but the winds were heavy up till Tanjore – something which we hadn’t predicted on happening this soon. We reached Tanjore by 645pm, checked in at the first water point, then proceeded to Pudukottai, little knowing we were heading toward far greater challenges ahead.

The headwinds up to Tanjore translated to tailwinds for around 10km. When all seemed to be going well, the winds picked up. Volunteers worriedly informed us about the thunderstorm at Pudukottai. The ride turned into a 18kmph crawl, which became worse when a fellow rider suffered a puncture. A few locals including an old couple helped us with the puncture. We spent 40 minutes with him following which we called Joy to help because of the tube slipping out. Anand and I then left struggling to maintain a decent speed against intense winds.

The lightning and thunder were dramatic and soon we experienced rain. Tired and irritated, we expected to slow down but instead the winds changed and the rain helped us move forward faster by lubricating our chains and reducing road friction.

We overtook several riders and managed to arrive at the first CP, albeit late by two hours.

THE RUSH OF ADRENALINE

FUELED by the fact that we were among the top 15 at the first CP, we gulped down a roti and loads of grape juice, courtesy of Pradeepa, before we left in ten minutes. We had a fairly decent lead because everyone else was taking at least 30 minutes to rest.

The winds were still on our side and in spite of rain we were flying along at 26kmph. We stopped for ten minutes break every hour and pushed ourselves hard till Karaikudi(50km from Pudukottai). We took a diversion as advised to avoid bad roads but still ended up facing 30 km of mud and stone. Milind, who was now with us had two punctures but was very skilled in changing tubes in ten minutes each. To make matters worse the rain was relentless and we we’re shivering whenever we slowed down.

WE HEAVED a big sigh when we reached Thiruvadanai , following which the rains reduced and we pressed on at full speed making use of good roads to get to Thondi. We then checked in at the second CP, then sped along East Coast Road till Ramanathapuram. Joy and Venkat sir were riding in a car all night helping us and other riders to replenish our tired bodies.

The ride to Rameshwaram was tiring under the heat. Long gone was the cold of the night, with the sun smashing against our faces.

Pamban bridge greeted us with open arms and we took a picture of it’s majestic view. Rameshwaram soon followed.

Anand and Milind decided to take a break and I pushed on ahead.

Somehow managing to keep my speed at 18kmph, I surely but slowly approached Dhanushkodi, which was 20km from Rameshwaram. The road curved and twisted into a beautiful pathway going through forests and beach sand on each side, alternatively. 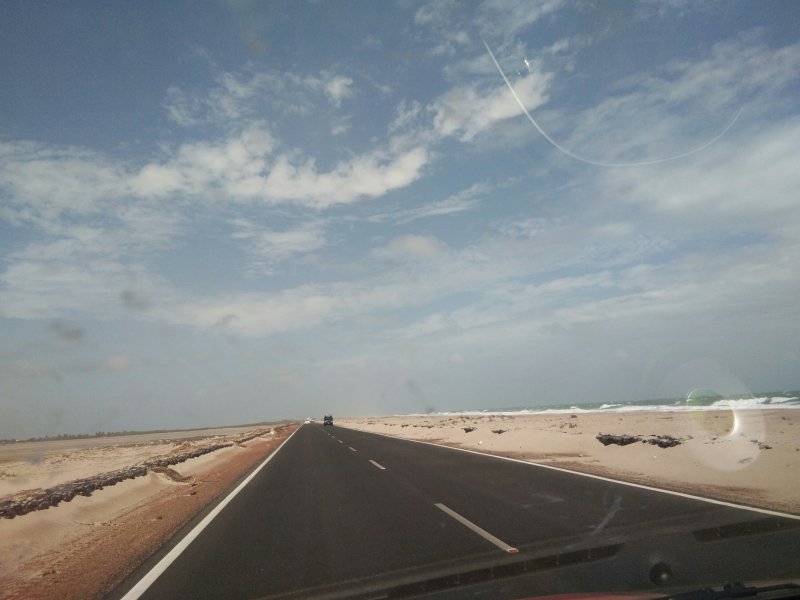 (Above pic taken from car during previous trip to Dhanushkodi)

The last 9km was mind boggling and it took all of my will power to keep pedalling through the wind and the sun. Milind caught up and we reached Dhanushkodi at 1115am. Not wanting to quit the running challenge, I did a short 2km walk at Dhanushkodi, which served as a cool – down.

Joy and Venkat sir treated us to food and drink at the third CP. Anand and Milind started back early and I followed them after ten minutes. We soon reached the hall at Rameshwaram where we were supposed to change. A fresh bath, food and drinks brought us back to 90% efficacy. Anand had some time to nap while I waited in queue to bathe. We started off in 45 minutes on our return journey, having oiled and cleaned our bikes.

WE MADE good headway with tailwinds on our side, but Milind had to drop out due to calf pain. We stopped to sleep at a bus – stop for 20 minutes after which we got moving again. It was the first time in my life that I fell asleep as soon as my head touched the cool hard stone.

We stopped for tea near Ramanathapuram and reached the 4th CP Thondi by 6pm with the last rays of the sun, setting just before we made it.

Thondi to Thiruvadanai was uneventful except for extremely dark roads due to lack of lighting and the clouds hiding the moon. We were chased by dogs but managed to pedal away easily. Then came the rain, which was now our worst enemy.

THIS WAS different from the first storm, with each raindrop pelting against our faces due to heavy winds. Worried about qualifying, I motivated Anand to keep riding at a slow pace. I used both my headlights to counter the bad roads till Devakottai but we still ended up being battered by then. The lightning lit up the whole road once in a while and the scene was straight out of Hollywood.

To our surprise, up ahead was the leading pack – Galin and co , fixing a puncture. We joined them at a hotel outside Devakottai and had dinner, all soaked from the rain.

We crossed them and headed to Karaikudi, gaining a good 30 minute lead.

KARAIKUDI SOON arrived and we took a 5 minute breather before heading to Pudukottai. The journey was supposed to take 2.5 hours but seemed a whole lot more.

Before we knew it, sleep hit us head – on. No amount of Red Bull or energy gels helped. I fought it off and pedalled harder but found it returned with a vengeance. Soon after, I thought I saw what appeared to be a few lead riders’ taillights conglomerating into a dancing figurine before spiralling into a cloud of smoke.

(Pics of hallucinations taken from closest similarities on Google) 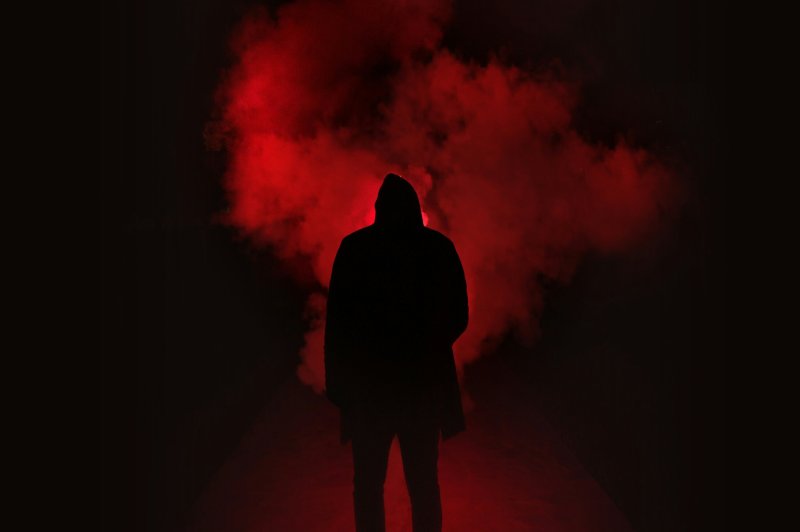 This was my first time of experiencing visual hallucinations. I blinked, shook my head and continued to ride when I noticed shrouded figures of humans and animals standing by the roadside which disappeared on drawing near. 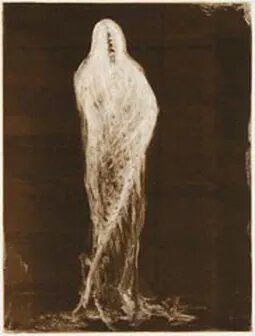 Figuring this had gone on long enough, I decided on a break.

Soon, I called out to Anand and my heart skipped a beat when he didn’t respond though I could see his headlight right behind me, swaying in the darkness. I tapped him and he woke up with a start. Two packs of riders went past us taking the lead once more, including Galin sir. We decided to rest at a petrol pump outside Pudukottai and another time at a toll booth. 45 more km to Trichy!

It was when we crossed Keeranur and had just 30 km left when my rear tyre went for a toss. Anand helped me with the change of tubes and we managed to resume cycling in 40 minutes. We crossed the Trichy toll booth and pedalled 5km before stopping for tea. Energised, we pedalled harder at speeds above 26kmph till we reached our end point at Annai apartments opposite Track and Trail. Pradeepa and Vijesh were there to welcome us with our medals and finishing pictures. Anand and I had arrived at 10th and 11th place out of 70- not bad at all. 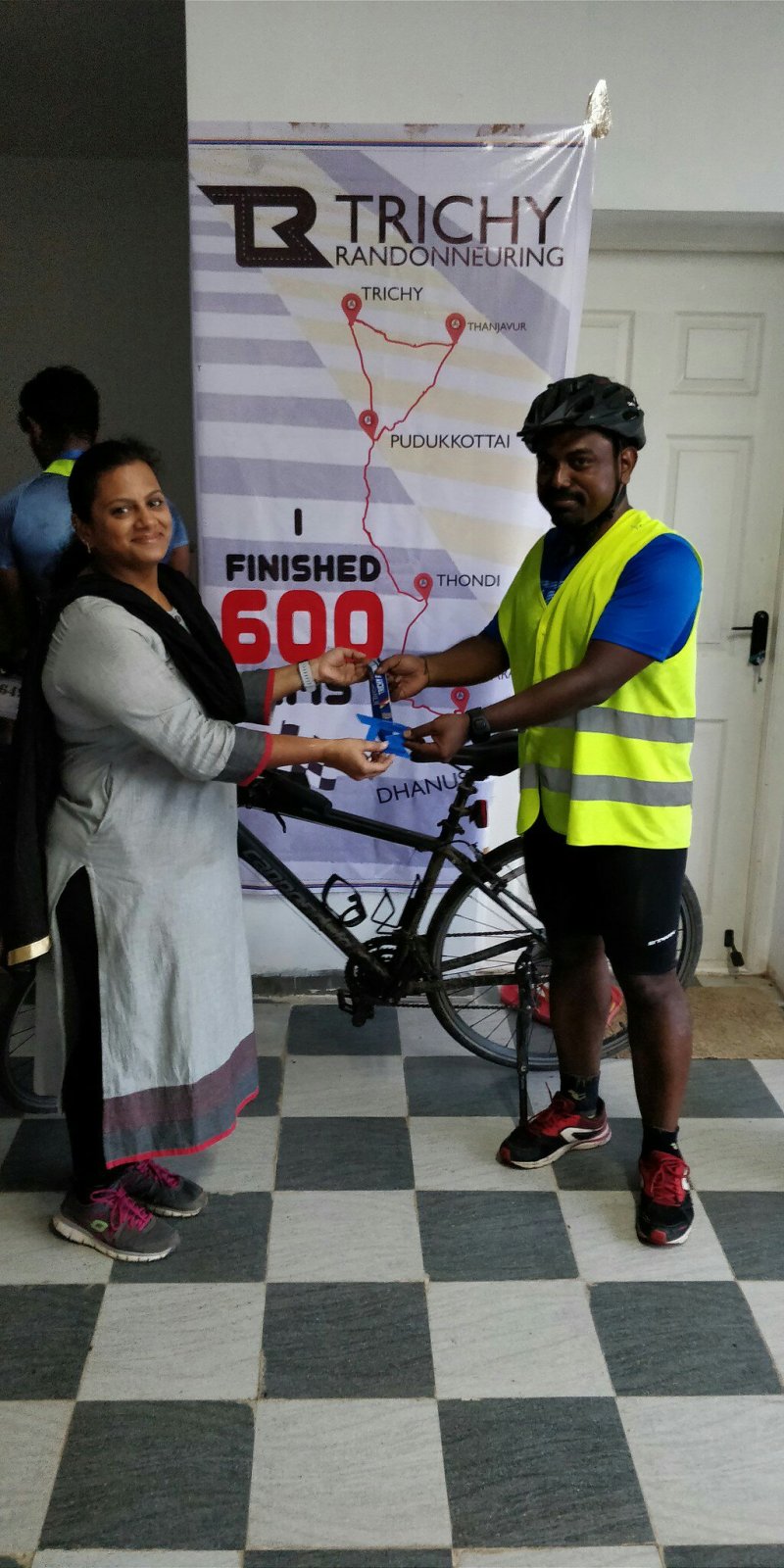 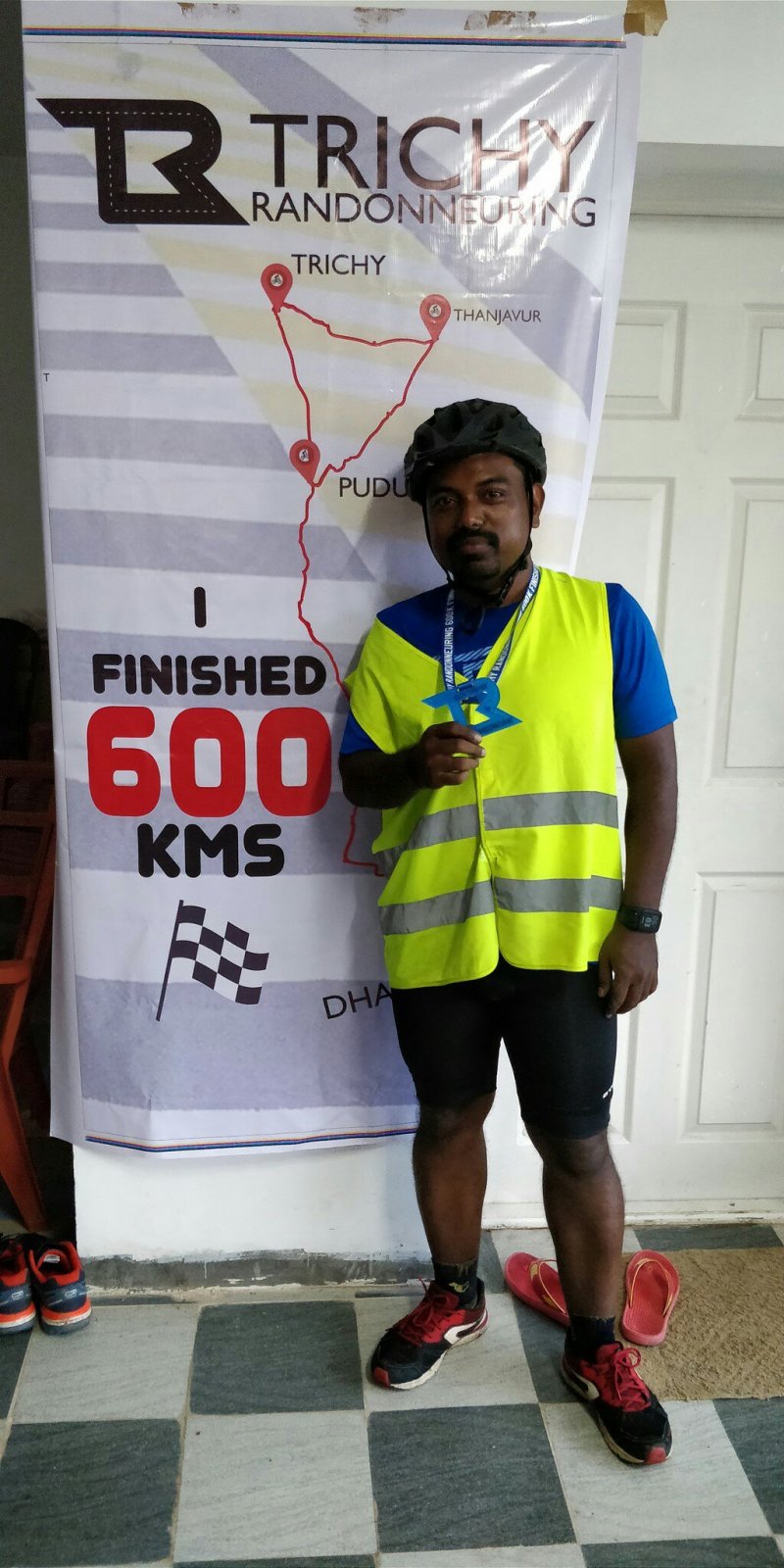 An egg and a muffin recharged me, following which I waved goodbye to my friends, disassembled my cycle and placed it in my Abarth.

A good three hours of sleep followed, after which I decided to return to work. After all, a hobby should never interfere with a bread – winner!

Overall the ride touched me in many ways. It made me more humble, more spiritual and gave me an idea of what my body is truly capable of.

Special thanks to my parents and wife who always give me space for my endeavors, for continuously keeping track of me via a GPS app instead of sleeping for two whole nights, for Vijesh and Prashant sir for awesome organising of the event, to Joy and Venkat sir for simply superb volunteering in the face of adverse events, to all the riders who faced the worst and overcame all odds – really proud of you! Till next time, it’s goodbye from me. God bless!