#100daysofrunning – I yawned, thinking I was mad taking up the challenge, because of the Dhanushkodi bicycle ride which clashed with the same (previous article). But as you all know, I decided to go with it anyway.

After 60 days of running were over, and the 600km cycling brevet was completed successfully, I entered all – out into running, climbing rapidly from 0 to 90th day from the 700th rank to the 200th in the country, in terms of cumulative mileage. When I expected my joints to disagree, I actually felt lighter and healthier than before. I was eating healthy and not skimping because I was giving it my all. The 90th day arrived and I wondered if I should keep a challenge for myself on the last day. I gave it some thought and decided to go with a slow 100k run over a timespan of 16 hours.

THE START POINT for the sake of convenience was to be my home.

Noone else was free to run with me on said day, and hence I chose a safe route- the same I had used for the 75km run previously described in this blog- the only difference being I would run an extra 65 km to Melur along the same Madurai highway road instead of turning back to Trichy. Melur is 25 km before Madurai en route from Trichy to Madurai.

AS THE DAY DREW NEAR, excuses cropped up, fears crept in, and laziness seeped into my mind. Pushing aside all negative thoughts, I starting calling volunteers to help me because I needed protection while running alone through the night. The plan was to start at 9pm on the 4th of August and finish by 2pm on on the 5th(Sunday). I had asked help from six volunteers but only two were confirmed – Jeeva and Abdul Basith. They were to drive motorbikes and assist with protection, nourishment and hydration.

830pm: Sending the last patient away, I sighed. Wondering whether I would have the strength to do this, I had a light dinner of mainly protein and a handful of rice, double checked the mobile devices, smart watches, portable charger, supplements, energy gels, water, money and a waist pouch.

Jeeva and Abdul arrived at sharp 845pm and we started the journey at 9pm.

The initial 20 km was a breeze and the pace varied from 5:30 to 6:30. Abdul proceeded ahead 50 to 100 meters in front, illuminating the way, while Jeeva followed 50 meters behind. This ensured I would be well illuminated and safe from being hit by traffic from behind. I was horrified in-between when I felt a small catch in my right buttock and hamstring but this wore off with some electrolytes and a mild change of running form. We had crossed the Boothakudi toll plaza by 11:15PM. 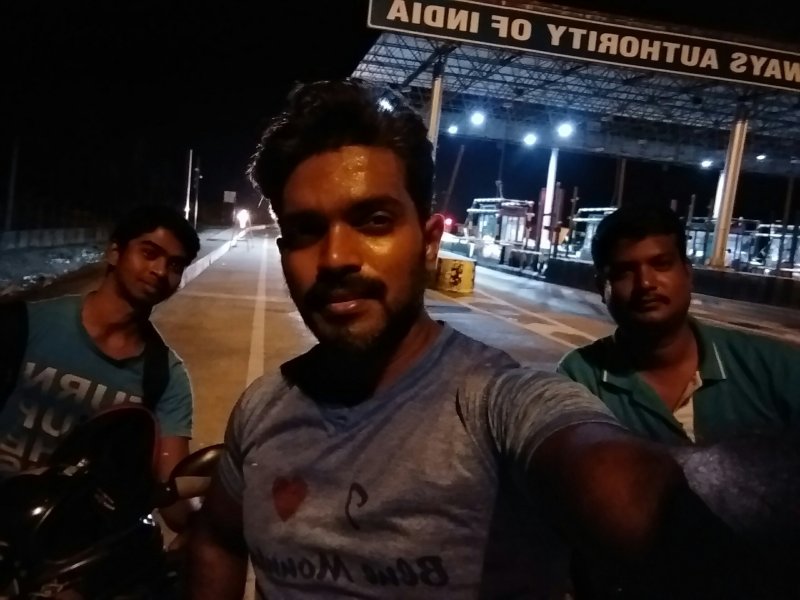 I was able to complete the first 40 km in just 5 hours (one hour before designated time).

Soon it was midnight and before we knew it, we had dogs barking and howling all around us. I stopped in my tracks at one place and pretended to pick up a stone, and they retreated.

2AM (40km complete): We stopped at a Kovilpatty(10km from Viralimalai) bus stop, wiped off the dust and lay down on the cement seat for 20 minutes and were back on the road. Tea followed for another 15 minutes where an accident had happened nearby. We passed the glass shards carefully and noticed the Toyota Innova on one side, it’s taillights flashing after a truck had rammed the parked car from behind.

We had two more areas of dog – trouble but were able to walk through them. 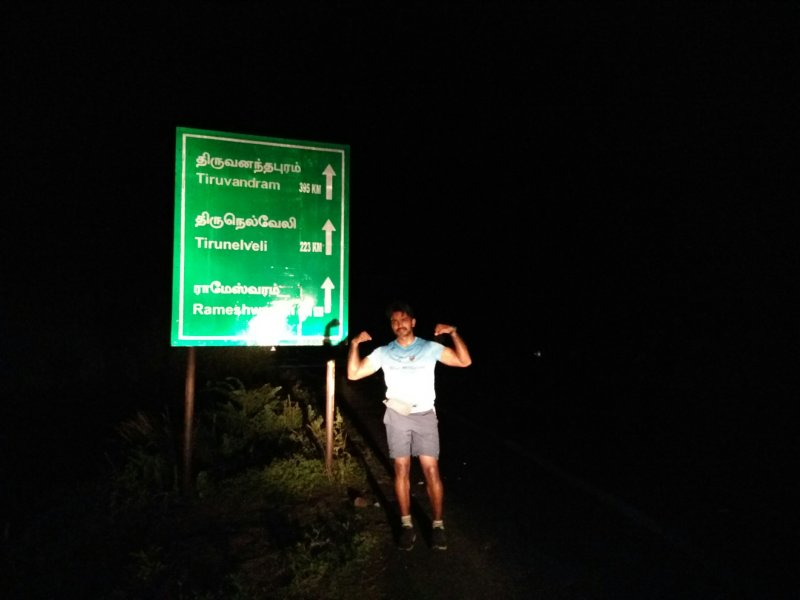 60 km covered: In another 20 km at Thuvarangurichi, we made the next stop at the 60km mark, slept for another 25 minutes, had tea for 15 minutes, offered fizzling glucose – electrolyte tablets in water to the volunteers and we were on the way by 5:55am. We crossed a petrol bunk at 620AM and I changed my clothes there after using the washroom. Gone was the Blue Mont Run t shirt, which was now replaced by a Spandex top resembling Thor’s.

Feeling significantly fresher and lighter, I proceeded at 5:30 to 6 pace making maximum use of the time before the sun came up hard. I donned my cap and shades. We stopped for breakfast at hotel Aryas (Kottampatty) around 24km from Melur. Before we knew it, we had finished 80km at 9am! 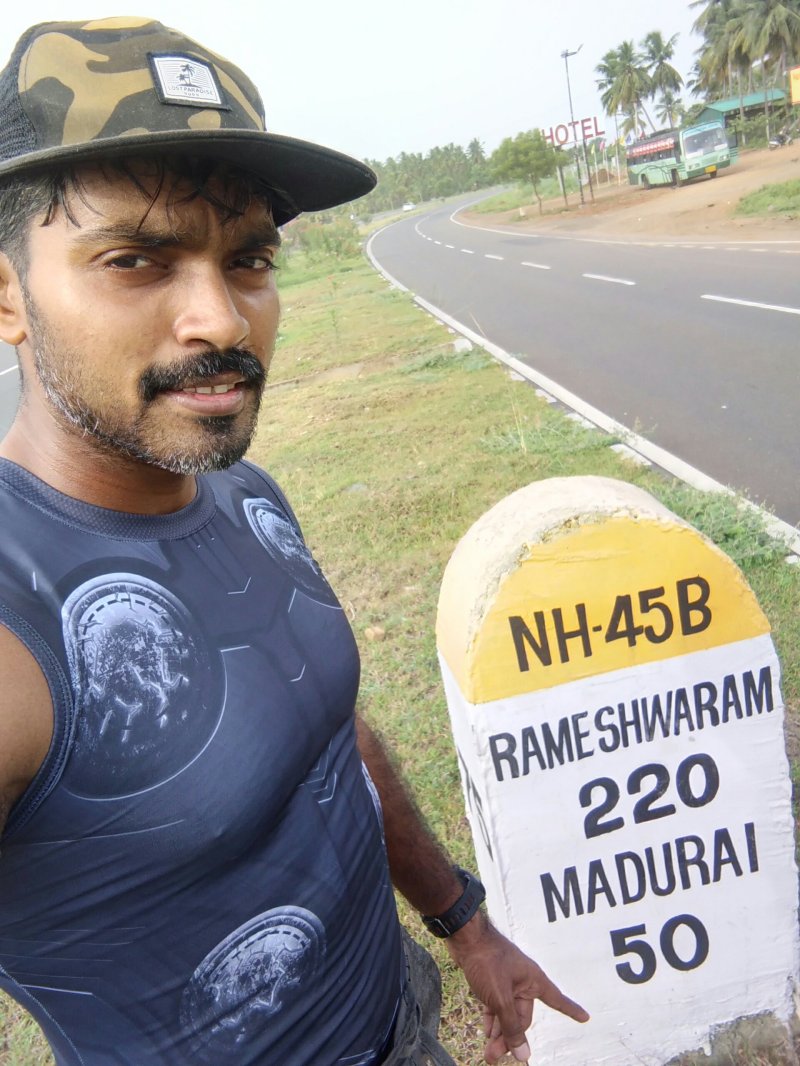 We made a live video for Facebook to let our friends know about the last day of the challenge and the distance covered. This would be the first time of my life that I would cross the 80km mark!

After another 8 km, my pace slowed from 6:30 to 7 and below. The sun’s rays were blazing now. With just 10km to go, every muscle was telling me to stop and my feet refused to move though my mental stamina was still fresh.

At the 94th km, I put on the 100 days of running t- shirt over the sleeveless top, to finish the run in style. I was still 100 minutes earlier of schedule and hence resorted to alternate walking and jogging for the next four km. Jeeva was very helpful in buying me bananas (Mondham palam) which were larger than the normal ones and these pushed me further over the next two km.

WE CROSSED THE HOTEL at the 99th km, and since we had not yet completed 100, I went on ahead for a half km and returned, sprinting the last 100 meters to complete the 100km run at 1230pm. Jeeva and Abdul were there at the finish point to give me the medal and we took some photos before I sent them home, profusely thanking them for all their help over 14.5 hours.

My cousin, Shruthi and her friend came by car to pick me up from Melur and we had lunch at Kumar Mess in Madurai, following which we left to Trichy with great memories. A 100 kilometers! From an average guy like me! Who would have thought it? Praise the Lord! 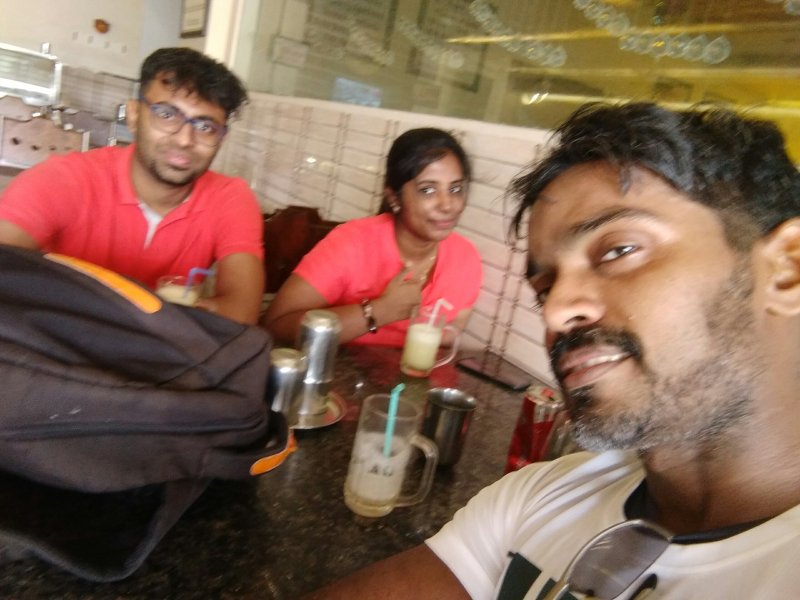 P.s: an account of my Strava activity, enclosed (only moving time recorded)