Diabetic retinopathy – sounds boring doesn’t it? But when not intervened early this can lead to permanent visual loss. There are two types:

2. proliferative, which requires green laser, intravitreal injections and surgeries to stabilize vision – none of which bring back lost vision.

Hence the need for something drastic to make people notice the need to keep their blood sugar under very strict control from the start! After all, why would you spend 100,000 on a disease you can prevent?

Which brings us to this huge scale event.

The pool at Ponni Delta was pitch dark. The only sounds to be heard were the water sloshing and the occasional sound of crickets. The moon was the solitary source of of light in an otherwise shrouded night sky.

I undressed, got into my swim trunks, got my refreshments ready inside the changing room to feed myself in-between what I assumed would be a 10 or 12 hour swim.

15km seemed like a daunting task. I had never swam more than 10km recently and that’s just what I love – a new challenge. The last time I swam 15km was at CTC Swimathon and that had taken 8 hours 35 minutes two years ago. (Read old post in my blog) I set off across the length of the beautiful thirty meter long pool with my Amazfit smartwatch logging my activity.

By 630am I was pleased to see I had already covered 3.5km. I had brought along cake and some fruits – I fuelled a bit, and continued. By 730am, 5km had gone by and I was happy that things were going well, when the nausea set in. Instead of panicking, I lowered my heart rate, slowed down and let my body take care of itself.

Soon the nausea had vanished and I decided to take a bathroom break at 8am. 7km in 3 hours – this was going better than I had expected. Back in the water, I focused on making my strokes smooth, breathing out inside the water steadily and taking short breaths of air before going in again. Bhuvanesh came by at 9am and stayed for an hour, taking photos to post on the fitness group on WhatsApp. 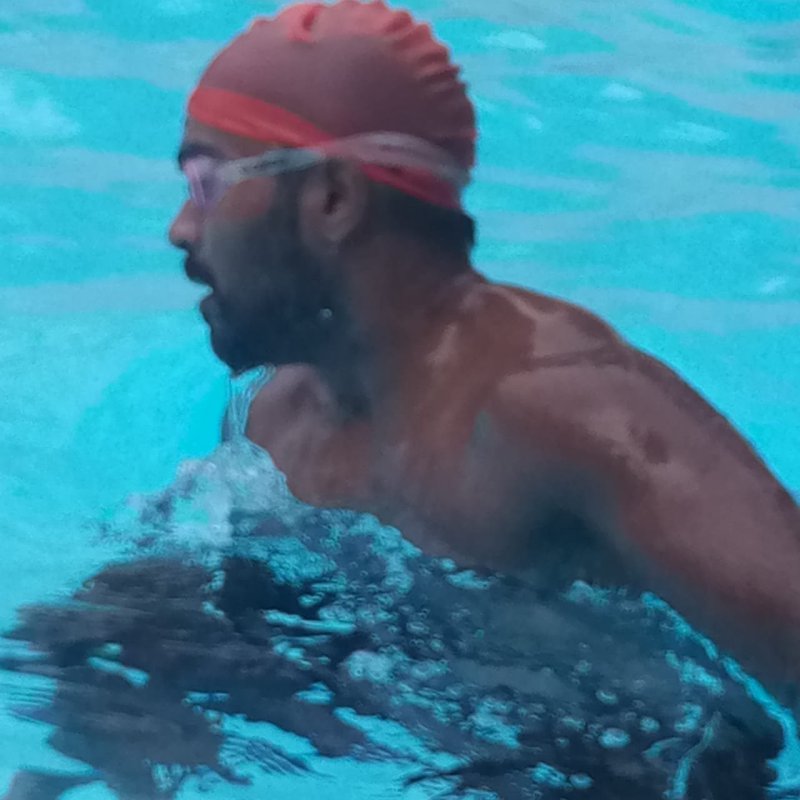 My movements were becoming choppy at this point since my body wasn’t used to swimming such mileage. I forced myself to relax and concentrate on smooth strokes and breathing, eventually managing to get back my rhythm. I proceeded to count the number of strokes per length of the pool and it stayed at 28 to 32.

Toward the last km I started swimming more of breast stroke and less of freestyle to preserve energy for the next phase. At noon, I managed to complete 15km and collapsed by the side of the pool.

I ate the rest of the food, hydrated well and took a nap. Aravind and Bhuvanesh were supposed to report at 1pm to start the cycling phase to Dindigul, which was 109km away.

I got the banner from the car and met Hari Raman who had graciously offered permission to use the pool for the day. 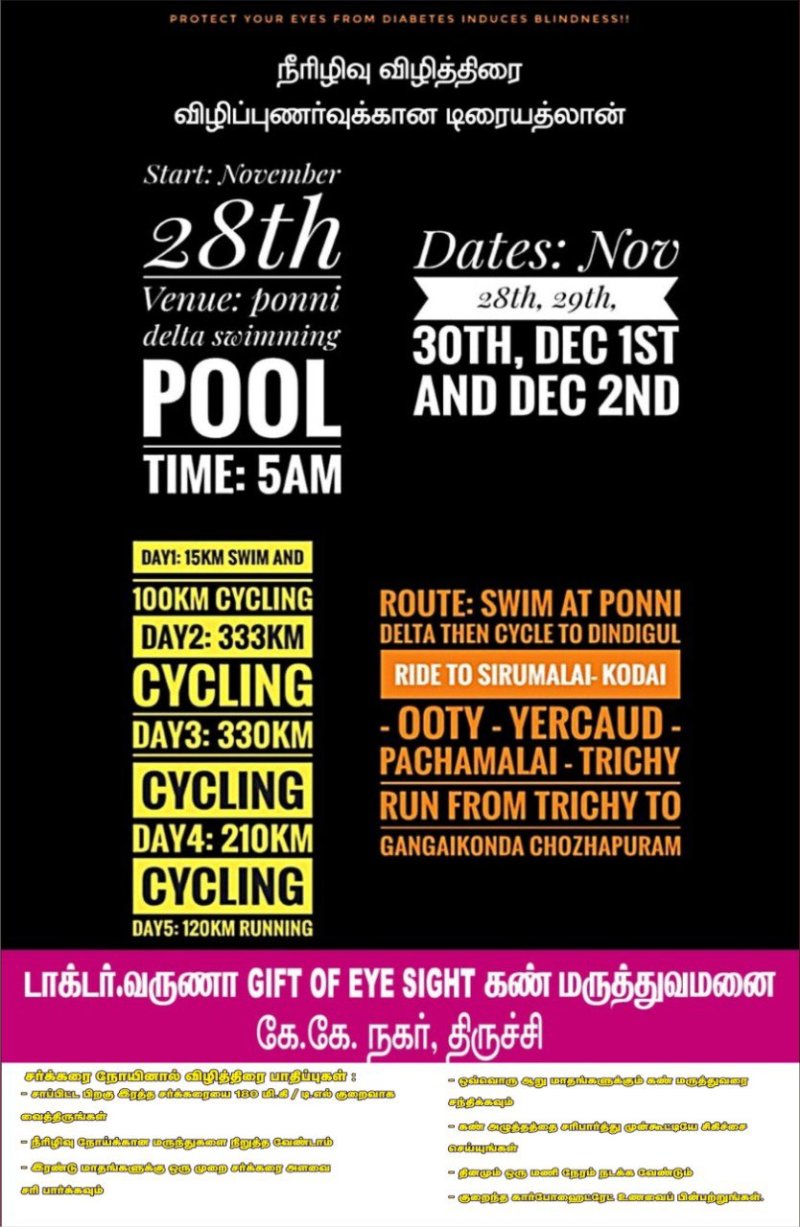 After taking a few photos with him, we put up the banner for display. I went back in and took another nap.

Swathi soon called when she arrived with the photographer for publishing the article on Times of India. The photographer took a few pictures of me swimming, cycling and running inside Ponni Delta by which time Bhuvanesh also joined. 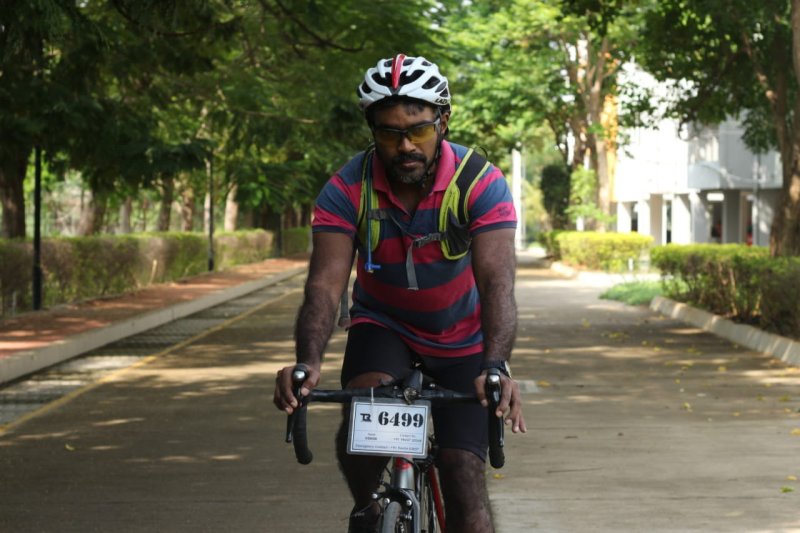 Aravind was running late and we managed to start the ride only at 230pm.

Phase 1a: cycling to Hotel Chenduran Park, Dindigul
Aravind – already an accomplished 1000km BRM rider, took turns with me switching up lead position to help Bhuvanesh keep up with the slightly heavier hybrid bike compared to our road bikes. We were doing pretty well at 23 to 25kmph. The elevation was steadily climbing but the energetic car support from Ramesh was more than enough to sustain us.

This is a rough elevation profile of our ride to Dindigul, from Trichy.

I kept pushing the boys to take no more than two minute breaks and it paid off when we reached Dindigul at 730pm. Finding the hotel was a different ball game and that took an extra half – hour, with Aravind and me overshooting the destination and making u turns to get back to the finishing spot on Google maps. Bhuvanesh found the hotel first and we decided to call it a day.

The hotel had a restaurant with nil maintenance and delayed room service but the room was neat and the food was good. Ramesh and I settled in early cos it was gonna be a very long day the next day. The boys went out (God knows where) and came back at 1130pm.

That marked the end of day 1- which actually became the easiest day among the five.