“HE’S UNNECESSARILY EXTRACTING MONEY FROM ME”, complained the old lady who had been advised panretinal photocoagulation by green laser. She had almost lost all her vision due to visiting her doctor late, and has refused to visit her ophthalmologist again because her first sitting of laser did not give her vision back.(PRP needs three sittings of laser)

I sat her down and explained the need for the next two sittings of laser which were necessary to preserve the rest of her vision. I also gently broke the news that she was too far into the disease to get any of her eyesight back. I referred her back to her previous ophthalmologist and advised her to listen to her healthcare practitioner and not worry about the cost at this stage. She gave a toothless smile and blessed me. Ah, the perks and the disadvantages of medical consultation!

Waking up at 330am had become easier now. I rubbed my left knee that was throbbing a bit after the encounter with the platform the previous night. I got up and was happy to note there was no pain on weight – bearing.

By the time I got everyone ready, it was already 430am. As we rode on through traffic and bad roads, the sky was dark on one side, with the moon casting it’s monochrome illumination over the urban landscape. The promise of dawn awaited on the other side with a definite lighter hue toward the east.

We stopped for tea halfway to Ooty foothills then proceeded to our destination. We reached Mettupalayam at 6am thanks to significant downhill roads, then went on to take the right turn after the bridge to ascend to Kothagiri.

We realised there were already “animal crossing” boards and recognised the possibility of no restaurants for breakfast. Ramesh took the car back to town in search of parceling something to eat, while we cycled onward, attacking the elevation gradient which was definitely tougher than Kodaikanal.

With each km we recognised that we could never reach the top on time, our speed dropping to a dismal 6 – 7 kmph low at times and going to 10kmph only at slightly lesser gradients.

Ramesh returned toward the 15th km upward and we enjoyed idlis and sambar which he had procured from a food cart due to unavailability of hotels at said time. Food had never tasted better as we gulped it down inside the car while hungry monkeys jumped on the bonnet and tried to snatch our food from us. We refilled with tea at a nearby shop and went onward again. 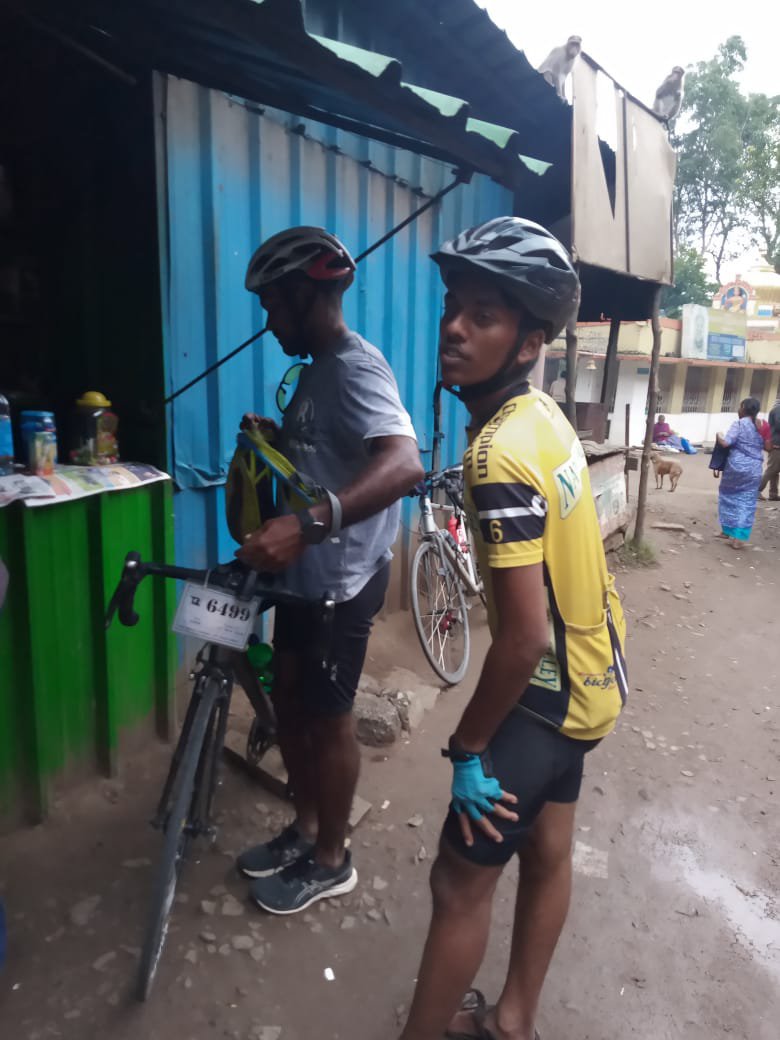 The slope progressively rose higher and higher and we were eventually cycling at 6 to 7kmph with frequent breaks. 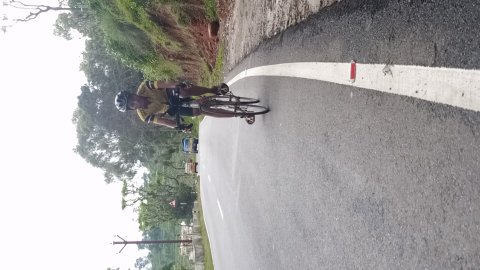 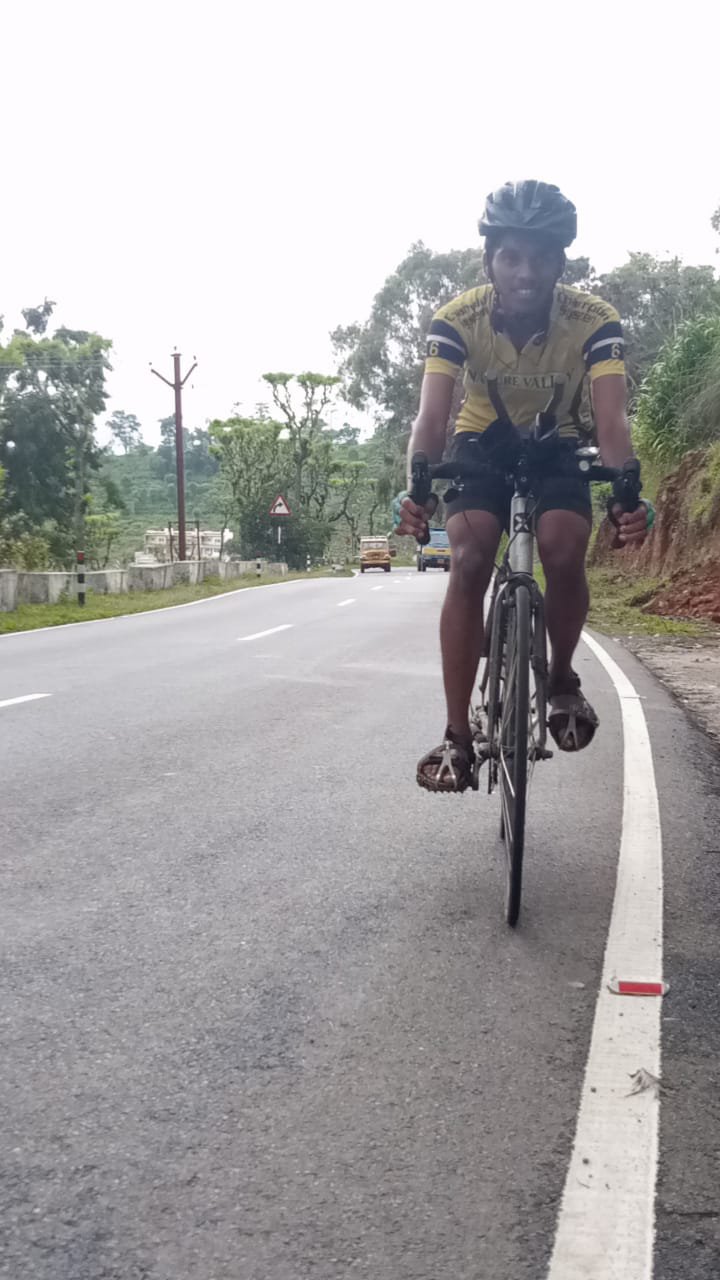 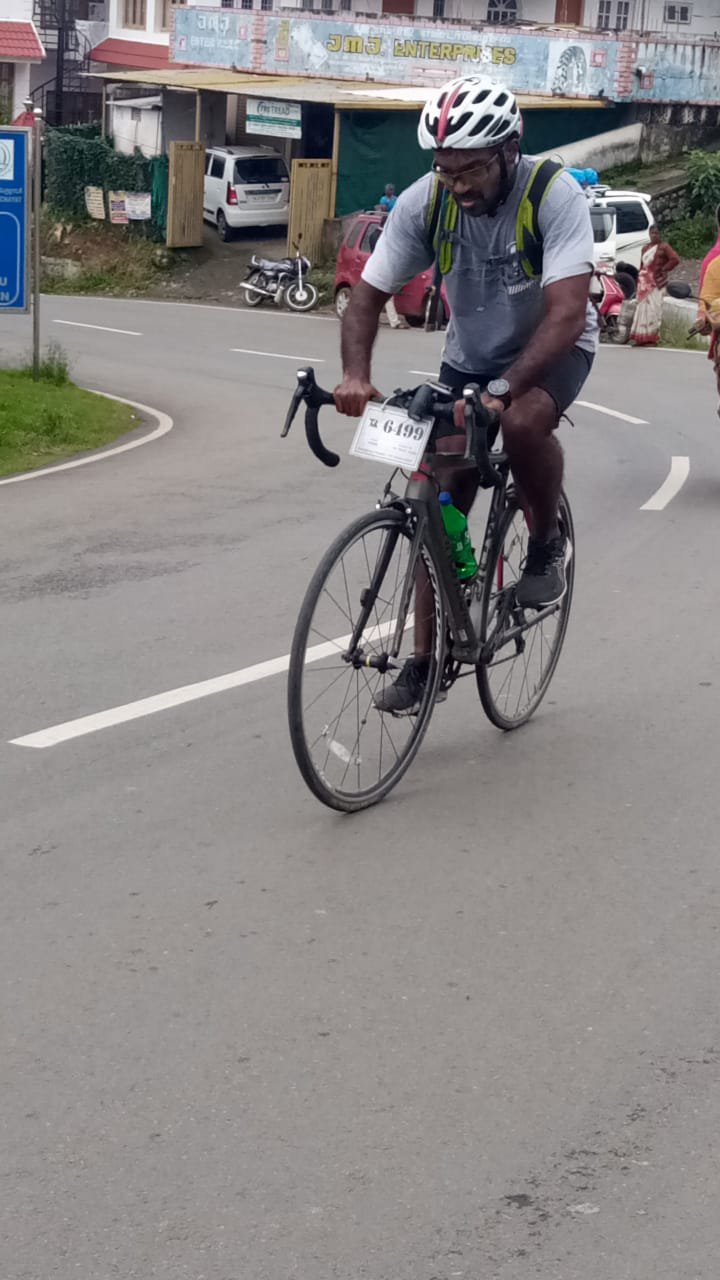 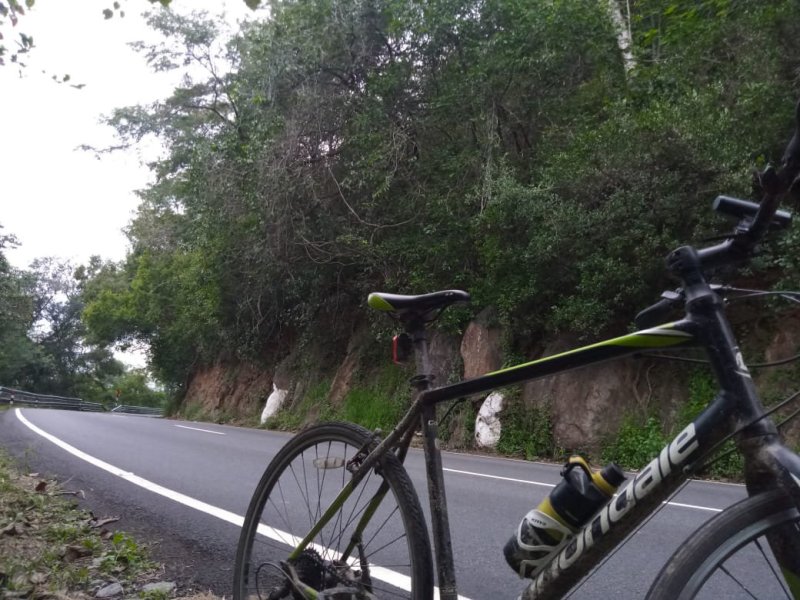 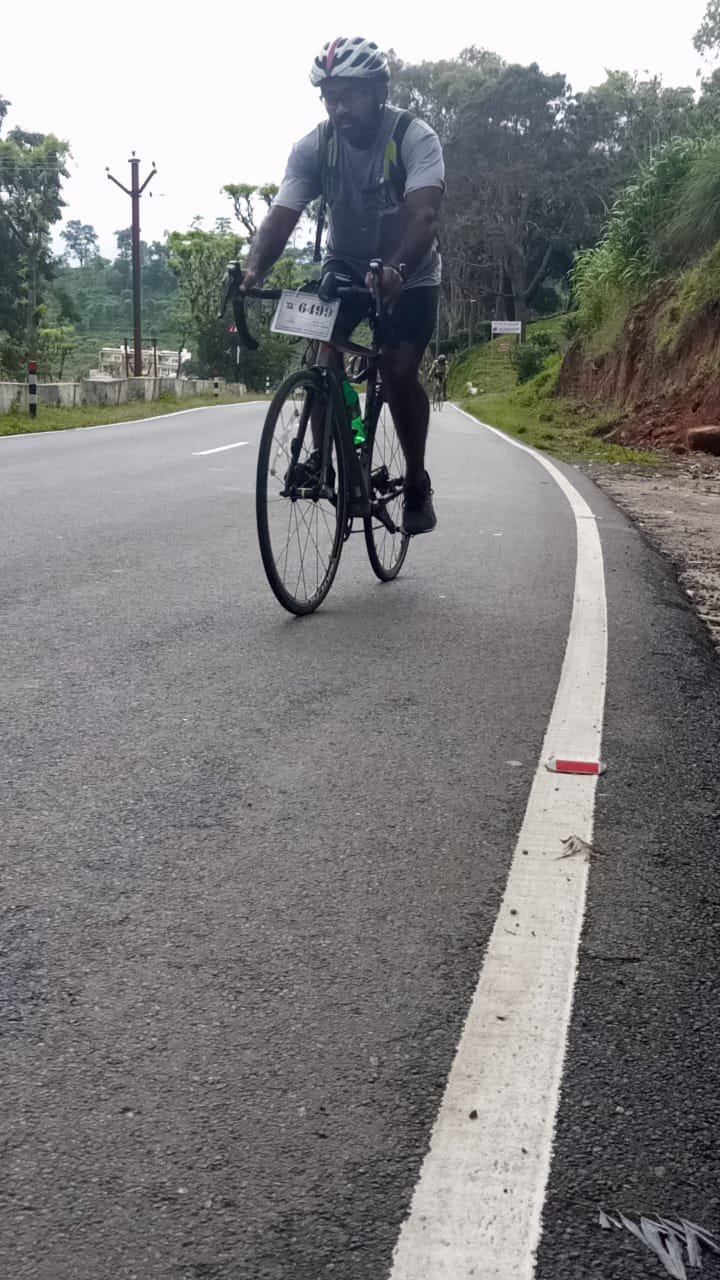 We crossed Kothagiri by 1230pm then pedaled ahead 19km to reach the U turn for the day, at Uwais CCD.

After this it was an all out sprint back downhill. The plan was to take the route via Sirumagai – Puliyampatti -Nambiyur – Gobichettipalayam – Bhavani and reach Salem by 1030pm. (142km from Sirumugai to Hotel Palm Residency, Ariyanur)

It was already 4pm and we were running out of valuable time. We pedalled as hard as possible and the roads had alternating elevation and troughs which both aggravated and relieved us.

The knee pain was becoming more and more intense. With medication after Nambiyur, the pain reduced enough to proceed. The rains returned after Gobichettipalayam along with bad traffic, who never bothered to give way for cyclists.

We soon had dinner at 8pm and found we still had 60km to cover but our bodies weren’t responding to maintaining a 20kmph average. Bhuvanesh’s head started nodding after a while and he couldn’t manage without sleep. He offered to rest while we moved on. Soon it was just me and Aravind, pedaling hard fighting exhaustion, to reach Ariyanur at 1130pm.

We requested Ramesh to bring Bhuvanesh back and we thank him for sacrificing his sleep to go back and escort Bhuvanesh back to the hotel. They arrived by 1am (I was drifting in and out of sleep waiting for them to return) and soon I was at peace, following which all of us were sound asleep.

The adventure cost me my knee though and the pain was slowly returning. I had to take another paracetamol with aceclofenac and serratiopeptidase before bed.

Two more days to go – will it be possible with this battered body?